Terri Minor Spencer: A Force of Nature in Her Community - FAMM

Terri Minor Spencer: A Force of Nature in Her Community

HomeStoryTerri Minor Spencer: A Force of Nature in Her Community

“Good Morning, Boom Shakas! Have A Great Day, Do It With Your Chin Up & Back Straight”

Scroll down Terri Minor Spencer’s Facebook page and you’ll see many messages like this one—and in Terri’s case, what you see is what you get, even on Facebook. As a community activist in her hometown of Pittsburgh, she’s a force of nature, exuding positivity, warmth, determination, and vision. It’s hard to imagine her any other way.

But in 1992, Terri found herself feeling anything but positive. “I was messed up when I went to prison. I needed help. I really needed rehab, but that wasn’t available to me.” Only two months into a long prison sentence on drug charges, she was sent to solitary confinement (SHU) after corrections officers found two onions in her cell. Her 17-day stint in the SHU shook her deeply.

Soon after, a big “ah-ha moment” came when she witnessed another prisoner and a guard having sex. “It was in the laundry room. I turned on the light and saw them, and I just froze,” she recalls. “This is going to be me, I thought. If I don’t stop how I’m feeling, what I’m doing here, this is going to be me. The very next morning I put in to see my counselor and I told him I needed help. And I took whatever help they could give me.”

“We started targeting the things that were wrong in our community, and thinking about how to fix them. Instead of saying what’s not here, let’s think of some things we can do.”

When she was finally released 13 years later, Terri asked for help again as the adjustment to freedom took its toll. She once more sought counseling, and it started working to ease her anxieties and fears. What really worked, though, turned out to be helping others. “I was standing in the food bank line, and there was a young lady in front of me that I’d never seen before. And where I live, everybody knows everybody.

“So I said, ‘Hi, how are you? My name is Terri.’ She said her name was Keisha, and she was from Miami. She had just moved up to Pittsburgh and her concern was that she had children and there was nothing for them to do. She was right—there was nothing where we lived.” Terri kept in touch with Keisha, and the next time they met, Keisha brought a friend. “There were three of us, and we literally just started saying, ‘Hey, let’s start meeting once every two weeks. We started targeting the things that were wrong in our community, and thinking about how to fix them. Instead of saying what’s not here, let’s think of some things we can do. Like after-school programs. And it just took off.”

That chance meeting in a food bank line led to a deep commitment to her community, once known as the “forgotten community,” and to unwavering activism. Terri founded and is now the executive director of West End P.O.W.E.R. (Providing Opportunities With Effective Resources), a grassroots nonprofit focused on community needs. Much of her work with P.O.W.E.R. involves support for returning citizens.

Terri knows firsthand, of course, how vital that support is to successful reentry. “It should be mandatory that when you come home you have to go through a career development course, for example. People need to know the basics. Like, women should not wear perfume in their interviews. You shouldn’t wear long, dangly earrings. Know something about the organization that’s hiring. Who’s in charge, what’s their mission. I think we’re failing in that area. We’re fighting so hard for prisoners to come home, and then what?”

When she’s not working at P.O.W.E.R., Terri is the director of community engagement at her church, does all kinds of volunteering, and is an outspoken advocate for criminal justice reform. She’s also jumped into politics; she was elected to the Democratic committee of her ward.

It’s hard not to feel enthusiastic and positive around Terri—from the moment you meet her. And city officials agree: The City of Pittsburgh officially proclaimed October 7 as “Terri Minor Day for Volunteerism.”

As Terri would tell you if she met you, “Good Morning, Boom Shakas!”

If Terri’s story inspires you to “Do It With Your Chin Up & Back Straight” and be a force for positive change in your community, become a FAMM Advocate. 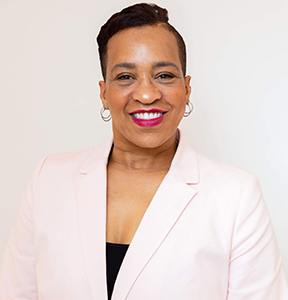 Does Terri’s story inspire you to “Do It With Your Chin Up & Back Straight” and be a force for positive change in your community? Become a FAMM Advocate!