The Story of Mandy Martinson - FAMM

The Story of Mandy Martinson

Mandy Martinson was serving 15 years in federal prison for helping her dealer-boyfriend in exchange for feeding her methamphetamine addiction. Mandy’s judge, unable to go below the mandatory minimum, expressed his objection to the sentence, stating: “The Court does not have any particular concern that Ms. Martinson will commit crimes in the future.” Mandy was able to achieve sobriety and get her old job back before her trial. Nevertheless, taxpayers were going to have to spend $420,000 to incarcerate the first-time, nonviolent offender for the mandatory 15 years – three years longer than the boyfriend’s sentence. President Obama commuted Mandy’s sentence in December 2016. She is now home, enjoying her freedom, and speaking out for reform. View her story below:

Mandy grew up in a happy home in Mason City, Iowa. Well-liked and cheerful, Mandy was an honor roll student in high school and went on to excel in college. Mandy had a steady work history and became a licensed dental hygienist after graduating with her Bachelor’s degree. She had experimented with marijuana and methamphetamine at parties, but in August 2003 she began using methamphetamine every day after her relationship with an abusive boyfriend took a turn for the worse. Even after she broke up with the man, Mandy was forced to protect herself against her possessive ex-boyfriend. The stress of domestic violence caused her to slide into what she describes as a “self-destructive rampage.” Her addiction to meth eventually cost Mandy her job as a dental hygienist.

In December 2003, Mandy started dating a man who was selling methamphetamine. They soon moved in together, and though Mandy knew that he was a drug dealer, she did not care because he was kind to her and had a steady supply of drugs. Mandy never sold drugs or carried a gun, but she traveled with her boyfriend when he went to pick up marijuana and one-pound quantities of methamphetamine from his supplier. She also helped him count and bundle money for the drug transactions. Unbeknownst to Mandy, her boyfriend had been under police investigation since October 2003.

Iowa police discovered that Mandy’s boyfriend and several others were receiving drugs from California and Des Moines, Iowa, and selling them in the Mason City, Iowa area. On January 5, 2004, police stopped a man after he left the house Mandy shared with her boyfriend and found 28 grams of methamphetamine in his vehicle. Police searched the home of another suspected co-conspirator and found drug paraphernalia. On January 14, 2004, police searched Mandy and her boyfriend’s home. They found a duffle bag that belonged to Mandy’s boyfriend containing ten one-pound packages of marijuana and two one-pound packages of methamphetamine “ice,” as well as two handguns. One of these guns was found in a large bag that also contained Mandy’s purse.

Prior to her trial, Mandy was released on bond and entered into drug treatment. When she failed a drug test, the court gave her a second chance, and Mandy was able to successfully achieve sobriety. She resumed her old position as a dental hygienist and started to piece her life back together.

At Mandy’s trial, her boyfriend testified against her, claiming that her assistance made him a more efficient drug dealer and that he’d given Mandy the gun found next to her purse. According to Mandy, the gun was her boyfriend’s. She was convicted for both the drugs and the gun.

Mandy was held accountable for all 4,506.9 grams of marijuana and 979.19 grams of methamphetamine attributed to the conspiracy, giving her a sentencing guidelines range of 188-235 months. At sentencing, however, Mandy’s judge balked at imposing such a long sentence:

[T]he evidence demonstrated that [Mandy] was involved due to her drug dependency and her relationship with [her boyfriend] and that she was largely subject to his direction and control . . . Even Ms. Martinson’s possession of the firearm was at the direction of [her boyfriend] and was facilitated by [her boyfriend]. By accepting responsibility and cooperating with the government, the apparent leader of this matter, [Mandy’s boyfriend], has ultimately received a sentence of 90 months on the conspiracy and 60 months consecutive on the gun charge for a total of 150 months in custody. Under any possible sentence that the law would allow for Ms. Martinson, the sentence will exceed that of [her boyfriend]. Ms. Martinson’s involvement is closer to that of [one of her codefendants] . . . who received a mandatory minimum sentence of 120 months. …Upon obtaining reasonable drug treatment and counseling and in the wake of what she is facing now, the Court does not have any particular concern that Ms. Martinson will commit crimes in the future.

Nonetheless, the judge was forced to give Mandy a mandatory minimum of 10 years for the conspiracy and possession charges, and a mandatory five-year consecutive term for the gun charge, for a total sentence of 15 years behind bars.

Since her conviction, Mandy has successfully completed numerous additional treatment courses and remained drug free. She has been certified to operate heavy equipment, is taking a horticulture class, and is teaching a course on The Purpose Driven Life. Mandy was also selected to be a companion to prisoners on suicide watch. 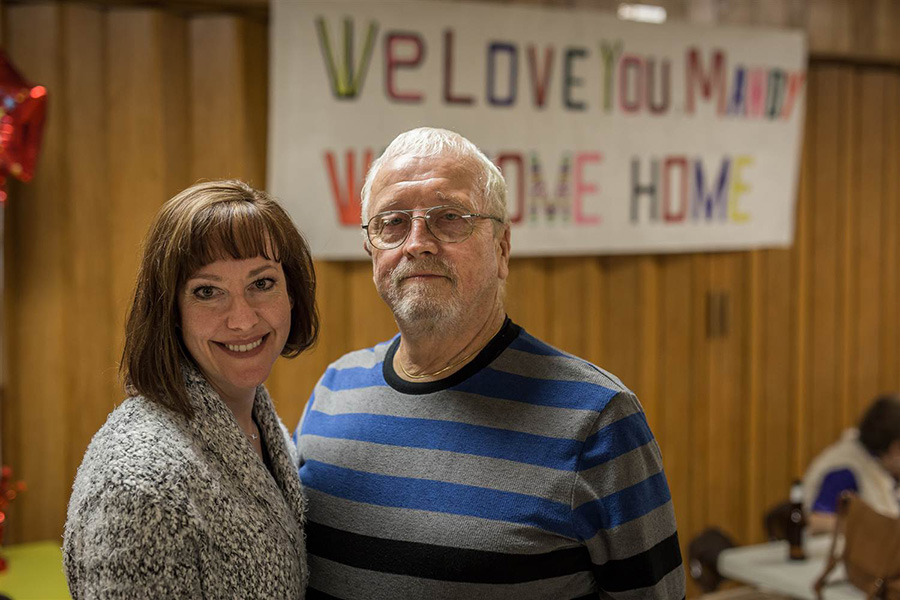 Sadly, she lost her beloved mother, Cindy, to cancer in 2014. She remains close to her father, Bill, and many other family members and friends whom she is eager to spend time with once she is released.

“It is very frustrating to think I may have so many years left in prison,” says Mandy. “I am making the most of my time here, though. I know change is coming. There are just way too many people like me incarcerated for way too long.”