Four years ago this month, Katie Hoyle finally walked free out of prison. Now, she’s planning to walk across the stage of Iowa State University in the spring of 2018 to receive her college degree.

Almost 25 years ago, Katie Hoyle headed off to the University of Iowa for freshman year. She had ranked fourth in her high school class, scored a 28 on her ACT test, and she had a full tuition scholarship. But things didn’t go as planned. According to Katie, a lot contributed to that: “High school was easy for me so I didn’t learn good study habits, I went from a strict household to no supervision, I had culture shock transitioning from a small town school to the huge campus life, and, of course, the ‘wrong’ guy.”

The summer before college she met a small-time marijuana dealer, and for Katie nothing would ever be the same. She went on to drop out of college after her second semester, and by that summer her boyfriend decided to take off for Key Largo, Florida, where his brother and grandma lived.

Katie found out she was pregnant, so joined him. It didn’t take long for the couple to meet the “right” people and her boyfriend was dealing again. Neither one of them was an addict, Katie says now. It was the money and laziness that kept them “in the game.”

The two moved back to Iowa in 1996 and continued the same lifestyle, even though their family would eventually grow to include two more children. Katie did continue to chip away at her education, finally completing her AA degree at the local community college. However, Katie admits, “During this entire time, in the background I was still engaging in the activities that would eventually land me in federal prison.” By 2002, in fact, they were living in Arizona moving large quantities of marijuana from there to Iowa.

It came to a head in 2007, when Katie was indicted for conspiracy to distribute marijuana and money laundering. In 2008 she was sentenced to 108 months in federal prison. The prosecutor enhanced her sentence for various factors, and even though she was a first-time offender, with a criminal history category I, Katie served six and a half years and was released in December 2013.

“That’s a lot of time to reflect on what a mess I had made of my life, and one of the biggest things that I regretted was never finishing my education,” Katie reflects now. “I had a lot of time on my hands during those years, and a lot of money … why in the world didn’t I at least f

While Katie was incarcerated, her family pulled together and did a great job of raising her kids. Katie’s dad took guardianship of her then 8-year-old daughter and 10- and 12-year-old sons. Eventually, her grandparents moved in to help, and Katie’s three sisters also pitched in.

Katie considers herself lucky to end up at the Federal Correctional Institution Waseca for most of her incarceration. Unlike many others in the prison, she was just a three-and-a-half-hour drive from home. When her family could, they would coordinate schedules to make the drive to Waseca for visits.

During her time at Waseca, Katie worked at Federal Prison Industries (UNICOR). Waseca had a textile factory and Katie worked as a clerk in the business office. This position meant she didn’t have to ask her family to send money. It also meant that she was able to make enough money for weekly phone calls to her children, which she credits for keeping their bond strong.

Once Katie was released, she got busy making up for lost time. While it was much harder to find a job than she had anticipated, she was eventually referred by an old friend to a great job with a company willing to look past her criminal history and give her a second chance. Katie has been so successful in that job that the company ended up hiring two more released federal prisoners based on her referral.

Katie knows how lucky she’s been. There aren’t many companies out there willing to take a chance on a felon, and often jobs available to felons pay badly.

“Another problem,” Katie says, “is that the reentry help that we are led to believe will be available to us upon our release is minimal if it is present at all. Factors like these are just a few things that contribute to the high recidivism rate. Another factor is lack of educational opportunities while incarcerated.”

Today, Katie’s kids—Zach (23), Austin (21), and Vanessa (19)—are enjoying good times with their mom. And in 2014, Katie enrolled at the University of Iowa for a second go. She’s been much more successful this time around.

“Before my incarceration, I had planned to pursue a degree in accounting; however, the money laundering charge I had served time for meant that a career in the finance industry was no longer a viable option. I have always had an interest in the social sciences, especially history and political science. I had dreamed of becoming a professor but had been intimidated by the idea of balancing the necessary education to teach and the demands of raising a family. 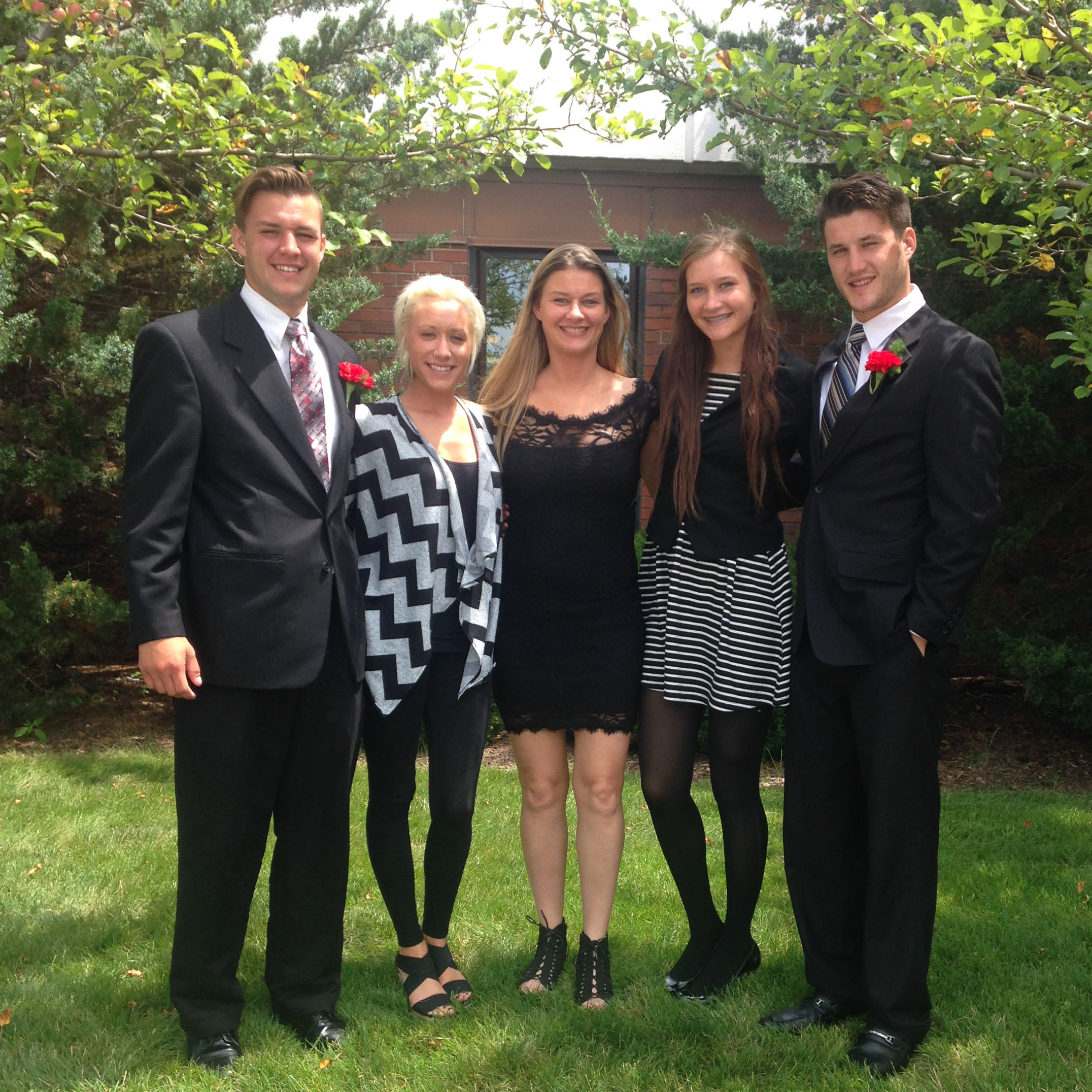 “But my experiences behind bars, I realized, have given me a unique perspective that would be an asset when trying to connect to students. I had to develop some pretty good social skills in prison learning to get along with an extremely diverse group of people in order to adapt and thrive.”

Katie was able to juggle kids, work, and school and will graduate this spring. She has been accepted to Iowa State University’s master’s program in political science. Public policy, she says, allows her to combine education with her goal of becoming involved in sentencing reform. In fact, her thesis topic will be felony disenfranchisement.