Anyé's Story: Speaking Out and Breaking a Vicious Cycle | FAMM

Anyé’s Story: Speaking Out and Breaking a Vicious Cycle

HomeStoryAnyé’s Story: Speaking Out and Breaking a Vicious Cycle

My name is Anyé Young and I am the child of a prisoner. I was born in Greensboro, N.C., and now live in the Washington, D.C., metro area. I am currently 17 years old, a graduating senior in high school, and an honor student. On Father’s Day, June 2018, I self-published my first book, Teen Guide to Living With Incarcerated Parents (#TGLWIP). That summer, I was 16 and my father still had six years remaining on his 12-year prison sentence.

I was nine years old when I learned my father was sent to prison in North Carolina — 300 miles away from me. Imagine only being able to talk to your parent once a week for 15 minutes at a time. Or, not being able to see them more than a few times a year, for only two hours. Imagine having grown up with someone by your side your entire life only to suddenly have them ripped away for over a decade. I understand that pain because I’m still having to go through it every day.

I have to accept that my father was sentenced as a habitual felon and was given the maximum sentence for stealing clothes and breaking the sensors. He didn’t get 12 years in prison because he killed or physically harmed anyone. He made poor choices and unfortunately received an extremely long sentence. His choices are now something that both he and I must suffer the consequences of. Not only is he unable to raise me for over a decade of my life, he and I are now both living with the trauma of being the child of an inmate. His father, my grandfather whom I’ve never met, is also in prison and was absent for all of his life. This was partially because my grandfather was a deadbeat dad, having only met my father about three to four times before later being sent to prison, well before my father’s sentencing. It’s a vicious cycle that has resulted in generations of fathers being imprisoned for extended periods of time. My father wasn’t able to break the cycle. But now I have a chance to do so, and I speak out as an advocate for other kids, like me, who are children of inmates.

I know from personal experience what it feels like to be told by society that you are likely to be incarcerated simply because your parent is in prison. I grew up allowing myself to be affected by the stigma around having a parent in prison. I grew up doubting myself and feeling as though all my efforts to maintain a high GPA, be involved in my community, and get into a good college to further my education would all be for nothing in the end because society perceives me as just another statistic with a parent in prison.

Five years ago, I came back to the U.S. from being sent to Guadeloupe in the care of my grandmother so that my mom could get back on her feet. My mother was laid off and my father was no longer able to help her provide for me. I would tell people that I studied abroad but I never told them why. I always tried to brush it off or avoid talking about it because it was traumatic. When people asked about my parents, I’d tell them that my father lived in North Carolina. What I wouldn’t tell anyone was that he was in prison. It was kind of like lying by omission. I would tell just enough of my truth so that I wouldn’t have to relive it.

I always felt as though I needed to hide in order for people to not judge me. I knew they would if they knew my father was incarcerated. This really changed how I viewed myself. I picked on the small things I couldn’t change, like my appearance. I had very low self-esteem. My mother would try to do things for me to help me out of it. But this was really something I had to do for myself. She couldn’t believe in me for me. I had to find a way to believe in myself again.

By writing #TGLWIP, a self-help guide book that empowers teens and young adults, I took the first step in encouraging other children of inmates to dream big, pursue their passions, and, most of all, to believe in themselves. Children who have a parent in prison need to know that they do have value and they do have a place in this world! This is my way of contributing to my community and putting forth the effort to stop the cycle of mass incarceration.

I now speak at conferences and special events to share my story and inspire other children to use their voices to help change our criminal justice system. In my opinion, the solution is not always to throw people in jail or prison for ridiculous amounts of years. Punishment should fit the crime and persons found guilty of committing crimes should not feel like society has given up on them because of their mistakes. Most importantly, children with incarcerated parents should not be ostracized or looked at as though they’re criminals in training. As a society, we should remember that the inhumane, extensive sentencing practices punish the inmates and their children. There has to be a better way to enforce justice. 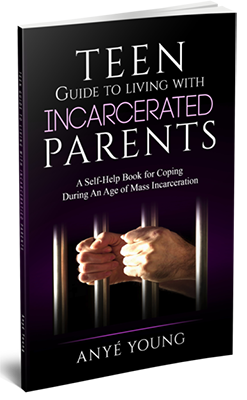 You can learn more about Anyé at her website, www.AnyeYoung.com.

Are you a teenager like Anyé with a parent in prison? Would you like to become an advocate like she is? You are not alone. There are so many kids with incarcerated parents, and together we can make our voices louder and make a difference. Go to FAMM’s Justice Action Now Center and join us!

Are you a teenager like Anyé with a parent in prison? Would you like to become an advocate like she is? You are not alone. There are so many kids with incarcerated parents, and together we can make our voices louder and make a difference. Go to FAMM’s Justice Action Now Center and join us!