A Second Chance So Dahvon Can Be “Part of the Solution”

HomeStoryA Second Chance So Dahvon Can Be “Part of the Solution”

Too many people in Illinois are serving long prison terms that don’t make communities safer, like Dahvon Wilson. There are plenty of people locked up who do not pose a risk to public safety, yet languish in prison for decades because Illinois’ laws don’t give them a second chance.

“The main reason I feel I deserve another chance is because I’m not an 18-year-old who doesn’t understand what life is about anymore. I’m a grown man who wants to be a part of the solution to a problem that is everywhere in urban neighborhoods, the problem of a lack of positive male role models to kids,” says Dahvon, now 32.

Having the wrong role models is part of Dahvon’s story. Around the age of 10, he became increasingly aware of physical, verbal, and emotional abuse inside his family home, where, in his words, “no one knew how to show love to each other.” Being outside of the house became Dahvon’s outlet, spending time with friends, where he felt loved. But “outside” for Dahvon was a place with a gang every few blocks. Looking back, he reflects, “you start looking up to people who aren’t the best role models for little kids.”

His family home fell apart. He left at 16. His mother moved to Alabama the same year. Dahvon does not know where his father went; they had stopped talking. Dahvon moved around, staying with friends or his then-girlfriend. He became a parent with her at 17. He was still at school and needing to provide for himself, his son, and his son’s mother.

At 18, Dahvon shot someone in a gang-related incident. The victim survived. Dahvon was sentenced to 40 years in prison for attempted murder.

Now 13 years into his sentence, Dahvon avoids any excuses: “I’m not like other kids where the streets picked them. I picked the streets over being at home. And that was the worst choice of my life.”

“Many people have got second chances and made the most of them. I’m one of those people. I just need the chance.”

Eighteen years old, facing 40 years behind bars, Dahvon was determined to not let the sentence define him. “It wasn’t hard for me to get a positive mindset in prison. I’ve always tried to look at it as school instead of jail.” Within two months of being locked up he got his GED. He then tutored, helping others to get theirs. He has sought out further educational opportunities, but has been unable to get into college courses, as those with closer outdates get priority. His family sends him books, which he devours.

He has plans for when he gets out to start a trucking business. He ties his reading into this goal:  books on getting a CDL, finance, and real estate. “I try not to waste energy on worrying about when I’m going to go home but instead on learning as much as I can so I can be successful when I go home.”

Despite his positive attitude, it’s been tough. “Prison has been hard for me because of what I’ve lost. The people. My youth. But more than anything, the time. The time I missed with my father and grandmother who aren’t here anymore. The time I’ve missed with my mother. The time I didn’t get to spend with my son.”

Dahvon’s son, Shamar, is 14. He was 10 months old when his father was imprisoned. “He is what I am most proud of in my life,” says Dahvon, who has “Shamar” tattooed on his right arm. “He’s everything I wanted him to be: smart, respectable, and talented. I love him with all my heart.” Shamar is the main reason Dahvon wants a second chance. He wants to show his son that “bad choices don’t define you but instead the time you put into being a better man does.”

As Dahvon puts it, “Many people have got second chances and made the most of them. I’m one of those people. I just need the chance.” Unless the system changes, Dahvon won’t be released until 2046.

For more information about second chances in Illinois and why they are so important, please read and share FAMM’s recent report. 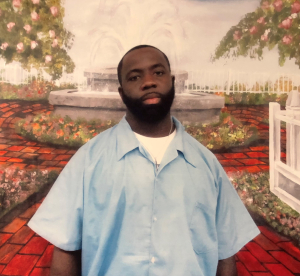