“There comes a point in a person’s sentence where they are so sick that incarceration loses any meaning or worse, becomes torture. If the programs are broken and can’t be used effectively, the lawmakers should fix them.”

In concert with the report, FAMM today also released a new national poll which found that 70% of Americans, across political lines, support compassionate release programs.

“At a time of concern about rising rates of crime, why are so many states wasting their limited resources to incarcerate sick and elderly people?” said Kevin Ring, FAMM’s president. “Committing to compassionate release programs could allow for funds to be better used to address concerns about crime.”

FAMM graded the compassionate release programs for each state in several categories before assigning a letter grade. The map of results is below.

The report is an update to “Everywhere and Nowhere: Compassionate Release in the States,” a comprehensive, state-by-state report on the early-release programs. That report was released in 2018. 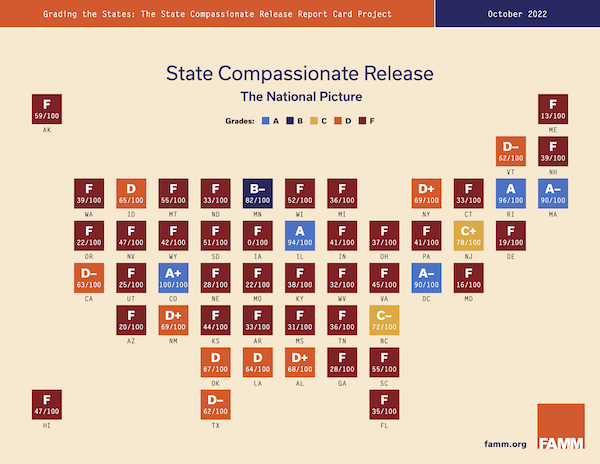 For more than three decades, FAMM has united the voices of affected families, the formerly incarcerated, and a range of stakeholders and advocates to fight for a more fair and effective justice system. FAMM has led the fight to reform extreme mandatory sentencing laws and to promote rehabilitation and dignity for all people in prison, 94 percent of whom will return to our neighborhoods one day.

FAMM is a national nonpartisan advocacy organization that promotes fair and effective criminal justice policies that safely reduce incarceration, save taxpayer dollars, and keep families together. Founded in 1991, FAMM has secured bold sentencing and prison reform across the country while elevating the voices of directly impacted individuals and families.