FAMM President Kevin Ring on MSNBC: “When somebody is drowning, they don’t care about the politics of the person who throws them a lifeline.” 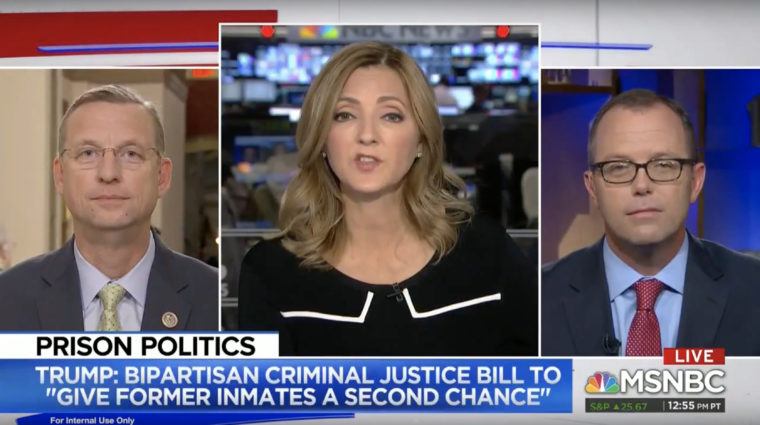 Ring on why this bill matters:

“When someone does time, the whole family serves that time with them. That this is a traumatic thing for families. They’re usually very far apart from their loved ones who are in prison. It’s hard to keep those family ties.”

“If people can’t be compassionate for the offender, for the person who made a mistake, then they should at least recognize that 94 percent of everyone serving in prison today is going to come home someday. They’re going to come back to our communities, and that’s in red states and blue states, towns and cities. They are going to be our neighbors again, so we want them to come back better than they went in.”

“When I was in prison, I saw people who wanted to have a second chance, but while they were there they got no programming, no training, no drug or alcohol treatment, nothing that was going to help them get back on their feet, and it was a complete waste of time and resources. So, I think what congressman [Rep. Doug Collins] have been able to do here, and he’s been a champion, is put together a bill that says, ‘While people are away, let’s do everything we can to make them better and make society safer.’”

Ring on the unique bipartisan nature of this bill:

“Well, there’s very few issues where you’re going to find bipartisanship, but this is one of them. Congressman Collins has worked with Congressman Hakeem Jeffries of New York. We’ve seen bipartisan cooperation in the Senate over a number of years. The bill passed in the House with an overwhelming majority, it would in the Senate as well. President Trump, who ran on a law and order campaign, endorsed it yesterday. And when you talk to the families of prisoners, they are not concerned at all about the politics of this.”

“When somebody is drowning, they don’t care about the politics of a person who throws them a lifeline. They just want to be saved. And for the tens of thousands of families out there, who are suffering under the weight of this broken system that we have, they’re looking for progress. And so, I agree with Congressman Collins – I hope that Sen. McConnell brings this up. I think it would get 80 or 90 votes, and it’s as close to unanimity as this country on any issue.”

For nearly three decades, FAMM has united the voices of affected families, the formerly incarcerated, and a range of stakeholders and advocates to fight for a more fair and effective justice system. FAMM’s focus on ending a one-size-fits-all punishment structure has led to reforms to sentencing and prison policies in 6 states and is paving the way to programs that support rehabilitation for the 94% of all prisoners who will return to our neighborhoods one day.

FAMM is a national nonpartisan advocacy organization that promotes fair and effective criminal justice policies that safeguard taxpayer dollars and keep our communities safe. Founded in 1991, FAMM is helping transform America’s criminal justice system by uniting the voices of impacted families and individuals and elevating the issues all across the country.